Call an Expert Plumber from Plumbline

From clearing a drain to repairing a toilet, our skilled plumbers can handle all your family's plumbing needs. We have seen a wide variety of plumbing issues in Littleton homes over the years and our experienced plumbers have the knowledge, parts, and tools to make a correct diagnosis and repair.

Our plumbers have worked in countless homes throughout Littleton over the years, providing a wide variety of plumbing services, including:

Experiencing issues with the water heater in your Littleton home? Whether you have a water heater that is leaking, not producing hot water, or making strange noises, our water heater experts can help. We have been installing, servicing, and repairing water heaters in Littleton and all over the Denver Metro area since 1998. Our plumbers have the tools, experience, and training to resolve issues on all types and brands of water heaters.

Are you suddenly having to deal with a slow or clogged drain? Relax and call the drain clearing experts at Plumbline! First, we'll snake the drain line with an auger to clear it. Then, if that doesn't clear the drain, we'll then conduct a thorough inspection of the drain line to make sure we have cleaned all obstructions from the line and there are no root problems or build-ups left. If that does not fix the clogged drain (which is rare), we can do a video camera inspection to find the root of the problem. For tough clogs, like grease build-up, we can use a high-pressure water jetter to clear the drain clog.

Our drain clearing experts can unclog your:

What to expect from your plumbing repair

Fixing a Leak in a Living Room Ceiling

James T., a Littleton homeowner, called us with a mystery on his hands: He had spotted a leak in the living room ceiling, directly below the upstairs bathroom. James had tried his best to find the cause of the leak but to no avail!

Our technician, David, cut and removed a 2x2 section of drywall in the living room ceiling to see if he could spot where the leak was coming from.

All he could see was a water mark on the toilet’s wet vent. This vent is the pipe you see sticking up out of the roof that runs through the attic and through the rest of the house (see photo).

To see if the vent pipe itself had a leak, David ran the toilet, but the pipe didn’t leak. David’s deduction: The water mark and leak must be from the where the vent exits in the roof (called a roof termination).

David didn’t suggest a repair. Instead, he suggested that James keep an eye on it for now. 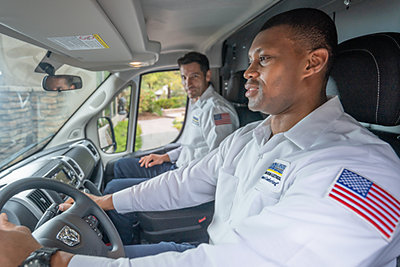 "They treated my home like it was their own."

It's our pleasure to serve people as far north as Longmont and south as Castle Rock. Check our service coverage in your area here.

Our VIP Plan is a customized maintenance plan for your home's plumbing, heating, cooling, and/or electrical equipment. Be proactive and choose your plan today!

Check Plumbline's current specials for some great coupons on services.