James T., a Littleton homeowner, called us with a mystery on his hands: He had spotted a leak in the living room ceiling, directly below the upstairs bathroom. James had tried his best to find the cause of the leak but to no avail!

Eventually, James realized he needed to call a professional, so he contacted Plumbline. We sent out David, one of our plumbing specialists, to solve the mystery.

Once David arrived, he decided to start his diagnostic process at the scene of the crime: the living room ceiling. He cut and removed a 2x2 section of drywall in the living room ceiling to see if he could spot where the leak was coming from. (Don’t worry, he moved the furniture underneath out of the way and cleaned up everything later.)

However, all he could see was a water mark on the toilet’s wet vent. This vent is the pipe you see sticking up out of the roof that runs through the attic and through the rest of the house. 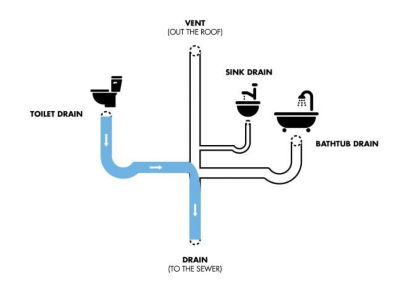 To see if the vent pipe itself had a leak, David ran the toilet. No leaks! So, David deduced that the water mark and leak must be from where the vent exits in the roof (called roof termination).

David didn’t suggest a repair at that time but suggested that they keep an eye on it for now.

“We had the rare problem of a leak in the ceiling below the upstairs bath. We tried everything to investigate the source. We finally needed to call in the professionals. We chose Plumbline because of their rating on Martino's Website. We were not disappointed. David Phillips and Steven, his trainee with 17 years of plumbing experience, arrived exactly on time. They listened to my plight and offered several tactics to diagnose the issue. We finally chose to cut into the family room ceiling. No plumbing leak - water was coming down the bath vent stack through the roof. They treated my home like it was their own. Yes, it was messy, but they moved all the furniture and cleaned the area better than it was prior to their arrival.”