Turn to the Experts You Trust

From HVAC to plumbing and electrical work, we can handle everything for your Lone Tree home.

Learn More About Our Services

Trouble with your home's air conditioning system? Whether you need AC repair, service, or installation, our HVAC specialists in Lone Tree can help.

Furnace or heat pump not blowing hot air? Want it repaired or need a new one? Our heating specialists in the Lone Tree area are ready to help.

Clogged drains? No problem. Leaks? No problem. Water heater not working? No problem. Our Lone Tree plumbers specialize in many common plumbing repairs and installations, 24 hours a day, seven days a week.

If it's got wires, our electricians are able to fix or install it.

A customer becomes a fan of her new fan

Janet, a Lone Tree homeowner, wanted to put a ceiling fan in her bedroom — something quiet and basic. 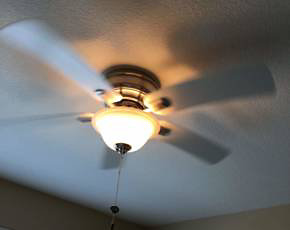 The new fan we installed.

Bob Moran was polite, respectful and did a great job. He respected my home and covered the area he was working and cleaned up after finishing the work. I found him to be knowledgeable and informative. I would recommend him to anyone.

It's our pleasure to serve people as far north as Longmont and south as Castle Rock. Check our service coverage in your area here.

Our VIP Plan is a customized maintenance plan for your home's plumbing, heating, cooling, and/or electrical equipment. Be proactive and choose your plan today!

Check Plumbline's current specials for some great coupons on services.